Thread Rolling is a process for forming screw threads. The rolled threads are formed into a blank by using a set of rolling pressing dies against the blank which has a specific diameter. The rolled threads are created by the deformation of the blank as the profile of the rolling dies penetrates the surface of the blank. The material is cold pressed until it reaches the bottom of the rolling dies’ grooves as well as the required pitch and major diameters. 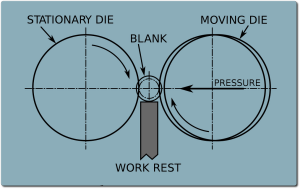 Click image to enlarge
Advantages of Rolled Threads
One of rolled thread characteristics is its “cold working” inherent feature. The part’s superficial hardness is increased by as much as 30% from its initial hardness condition. The following chart shows the resulting deformation of the rolled thread.

Click image to enlarge
After Thread Rolling, the bottom of the rolled thread as been compressed to its maximum “cold form” state (by as much as 220% deformation and compression), making the part much stronger in an area traditionally weak when threaded by other threading methods. That increase in strength and the glazing of the surface prevents incipient cracks to be formed, making the part stronger, resilient and more reliable. The thread flanks is also an area of important deformation (100% to 200%), resulting in increased hardness, which is desirable.
Rolled-threaded parts can thus support higher mechanical loads.
Traction Resistance
As mentioned above, and unlike other threading methods, the material “fibres” are not cut but deformed. This provides for much better traction resistance.
Precision parts delivered on time